Tomato jam will change your life.

Ok, this is a little dramatic, but for me every once in a while I begin to start ordering out, buying frozen foods and giving up a little in the kitchen. Even folks who love cooking get sick of having to make dinner every day and I start to call it in, literally. I am a person who craves change, moving forward, and learning new things, so to push myself out of these ruts it takes a new recipe that is exciting and makes me think “hmm, I never knew that existed!” when I taste or read about it for the first time. Tomato jam did just this and got me back in the kitchen and although I am not one to toot my own cooking horn I must say it is one of the tastiest things I have ever made.

I first tasted tomato jam at Scaddabush in Toronto, alongside mozzarella I filmed being made like a true tourist, sea salt, and focaccia crostini. It was surprisingly sweet yet tart with deep, caramelized flavours very different from even a slow long simmering of tomato sauce. Yesterday I made mozzarella for the first time (I didn’t even cheat and do it from fresh curds like those sneaky Scaddabushers) and it was good alone but lip smackingly tasty with this tomato jam. The jam actually took much longer to make than the cheese, but effort wise there is no comparison. Basically you just throw this in a pot, simmer it for at least an hour until it is a sticky beauteous concoction and try not to eat it all before you jar it up.

*If you look around at tomato jam recipes, there are many variations but none seem to note that the amount of sugar you use needs to vary based on the natural sweetness of your tomatoes. I bought the best tomatoes I have ever tasted this week at market, little golden heirloom cherry tomatoes which are amazingly sweet. They did not need much sugar, but almost any other variety would need a few teaspoons more.

This recipe makes 1 jar so I suggest you double it if you intend on sharing. However a little goes a lonnnng way. In addition to a Scaddabush copycat board that will save you $15 and impress the socks of guests. In addition to eating it by the spoonful, ideas for using up your jam include: 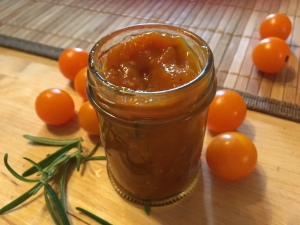 Add together in pot and simmer on low for 1-2 hours or until thick and jam-like. Taste and stir regularly to see if you need a little more sugar (or vinegar if you add to much sugar. It should be on the sweet side with a touch of tang.

A month or two ago I saw a guest chef on Rachel Ray using a stand mixer to make homemade butter from whipping cream. I was intrigued but alas, was stand mixer-less and didn’t look into it further.

Then last week I inherited my mother’s stand mixer, which I call Julia and pamper like my second child. Yesterday I ran out of butter and happened to have some leftover whipping cream in the fridge…. pretty soon I had BUTTER AND BUTTERMILK! So tasty and quick, and perfect on some Buttermilk Honey Bread. Incidentally, I used the beautiful buttermilk produced in the ‘churning’ process to make my next batch of bread!

I checked out a few recipes and ultimately found that the one from The Food Network helped to build my confidence in that it was extremely simple, but it was missing a few tips I would need along the way for guaranteed success.

Ultimately I made a slightly simplified version of the non-cultured butter from The Kitchn, and agree with the author that using your homemade butter in baking is tricky business. I did however use it to fry some perch and it was delicious! 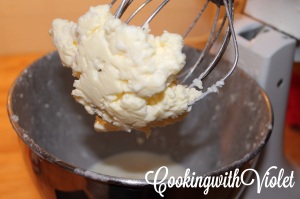 here the butter has separated from the buttermilk and is ready to strain!

Put whipping cream in mixer and cover most of bowl with plastic wrap to stop splatters.

Turn mixer on medium – high and leave on until cream separates into big clumps of solids and liquid (5-9 minutes).

Strain off liquid through cheesecloth and store (this is real buttermilk!)

Make a tight bundle with the cheesecloth and squeeze out remaining buttermilk.

Store in airtight container in fridge.*

* In the recipe from The Kitchn that I adapted, there is an ice water rinsing step which I have skipped. I imagine this step prolongs storage time, but I was not concerned with this as the butter was consumed within a few days.