I don’t usually overuse exclamation marks, but this shit was impressive!

With just banana you can make ice cream that is just as good as soft serve!

My husband is a soft serve snob and when he tasted it he looked at me like I had really pulled a fast one over on his taste buds.

Okay, are you ready? Here’s the recipe… freeze cut up banana then blend it up until creamy (my ninja made short work of it). That’s basically it! 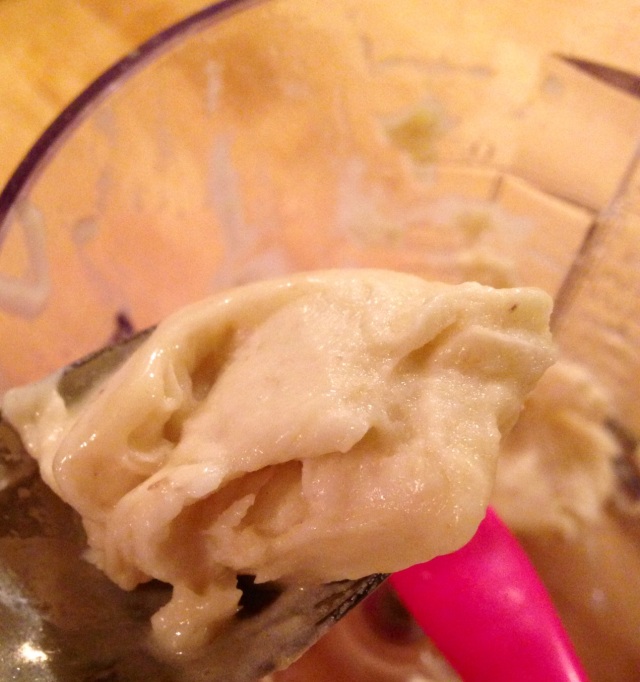 Recipe adapted from the Kitchn

* cut the (very ripe) banana in chunks then store in Tupperware, a jar, or similar in freezer for 2-24 hours. Blend in blender/food processor until creamy.

*It will go through a grainy stage before it turns creamy.

*add ins are unlimited! Vanilla and a touch of salt were divine. Peanut butter, honey, or caramel would be tasty too!

*don’t worry about storing it as you will likely gobble it all up.

I’m serving this at my next dinner party and I bet no one (who hasn’t read this 😉 will be able to guess what it is made of. It is not very “bananay” and consistency is so much like soft serve it really is amazing!

Coconut oil has been in my life for a few years and is a pretty big part of my skin care regime. I love the way it smells and my skin seems to love it too.

Soon I will be making whipped body butter with my giant tub of coconut oil (check out Costco for the best prices) for Christmas gifts but in the meantime, I wanted to try cooking with coconut oil for the first time.

I made these “Healthy Banana Chocolate Chip Muffins” which were quite good and I was so proud of myself for baking without oil or butter.

I tried frying in some of the oil and it was pretty successful – another win!

Then I started reading further about consuming coconut oil…

Based on the numbers, butter seems to be the better choice: it’s lower in calories, total fat and saturated fat. Plus, the percentage of fat from saturated fat is lower: 58 percent versus 86 percent.”

What about this whole “good saturated fat/ good cholesterol” argument?

From Dr Jay Kenny of the Pritilin Institute;

“Yes, studies of people on traditional Polynesian diets have found that they have relatively low rates from heart disease despite high LDL cholesterol levels, but other aspects of their native lifestyle are very healthful, and probably help counteract the cholesterol-raising effect of the coconut fat. Their traditional diet, for example, is very high in dietary fiber and heart-healthy omega 3 fatty acids from fish, and very low in sodium. Historically, native Polynesians also tended to be nonsmokers, and were physically very active. All these factors would certainly promote heart health.”

So, after all this I sit here with my batch of “extra healthy muffins” and shake my head. Next time I will be saving my coconut oil to use on my skin (and maybe trying some oil pulling as I think the taste would be better than other oils) rather than in my baking.

So, the verdict ? Coconut oil…. still mostly just for skincare.

As I have mentioned before, I never quite jumped on the panko bandwagon. Panko is expensive when store bought and often I find too large to properly stick as a coating. Honestly to me they have always seemed like snooty breadcrumbs which I could happily live without.

However after reading up on panko I realized they are just large, jagged breadcrumbs which I could make cheaply and a bit smaller so they would stick better but still absorb less oil than breadcrumbs, resulting in a crisper crust. Some sources such as Chow.com claim the bread used to make the crumbs must be crustless to differentiate them from regular breadcrumbs.

Either way I made some today with 1/4 of hard, leftover Buttermilk Honey Bread and they were SO good and made a huge pan full in minutes!

Try it today and you will never buy store bought again.

Cut bread into 1-2″ cubes and pulse in food processor until desired size. Lay out on cookie sheet and bake at 300f for 5 minutes, stir, then bake another 2- 5 minutes or until they feel dry but are not toasted/browned.

Cool and use in recipes, store in a jar for a week or so or freeze for later use.

The Kale explosion continues! I am seeing recipes on a daily basis all over the blogosphere and often they don’t direct what type of kale to use. Until recently, the only type of kale I was familiar with was the one I didn’t pay much attention to that I often saw at the grocery store. Then I discovered a local CSA had a farm stand just a few doors down from me once a week! I bought a share (meaning I pay a set price to receive a share of all the crops weekly) and am now trying all sorts of new veggies, including various types of kale.

At the grocery store, you typically see curly green kale (just called “curly kale”) and sometimes curly purple/red kale (usually just called “purple kale” although I have also seen it referred to as “red kale”). There is also the beautiful dinosaur (also called lacinato or Tuscan kale)  kale which is the hardest to find and my favourite. My lovely CSA farmer explained to me one day that they all have their best uses – here is a rundown for you.

Tear leaves off stems, wash and dry well in a salad spinner, then store in an airtight jar. It will last up to two weeks this way! Alternatively you can also just throw it in a bag in the fridge, and if it is a little wilted when you get to it, refresh it like you would a bouquet of flowers by cutting a bit off the bottom of the stems and placing in cold water on the counter for half an hour (then eat it -don`t restore after the revival).

My favourite thing about kale (other than it being a nutritional powerhouse) is how you can store leftover salads… even after they are dressed. In particular, creamy dressings are even better the next day.

Kale must be massaged during preparation for raw uses (like salads). This sounds strange but is so easy and quick – after tearing the leaves off the stems and washing in a salad spinner, place in your salad bowl and sprinkle with a touch of salt and oil (or some of your dressing) and rub/scrunch it into the leaves 5-10 times or until it begins to wilt. This rubs off the natural waxy coating on the kale, avoiding any roughness on your mouth. Dinosaur kale benefits from massaging but does not really have the same waxy coating as curly types of kale, so it is not as essential.

Dissapointed that you can’t find anything other than curly kale locally? Grow your own kale next summer (it is a very hearty plant) or even indoors this winter!